Thirsty Curses is an eclectic rock band from Raleigh, North Carolina.  The band draws from a wide array of influences and rock subgenres including indie rock, alt-country, punk, garage rock, and power pop.  Dying Scene wrote, “As schizophrenic as their genre influences seems to be, the one common denominator is that I dig every single track I’m hearing… ” John Adamian of YES! Weekly put it about right when he wrote, “Thirsty Curses make rock’n’roll, with a boisterous beer-swilling edge to it. Many of these songs are about living it up while things fall apart at the seams, or at least trying to find some glory in chaos and meaninglessness…{Thirsty Curses’] songs do a nice job of balancing exuberance and despair. There’s a thread of existential crises running through many of his songs, but there’s also a fair bit of shrugging off the hardship with bits of winking optimism.”

Thirsty Curses was formed in 2017 by Wilson Getchell and has featured a rotating cast of musicians with Getchell and bassist Clayton Herring serving as the two mainstays. Thirsty Curses currently consists of Getchell, Herring, and Manash Shrestha (drums), featuring Ryan Wooten on lead guitar.  Thirsty Curses’ songs are both impassioned and sardonic; comical and foreboding, and often deal with heavy subjects but generally feature a humorous nudge and wink to the audience. Thirsty Curses has released four albums:  Holy Moly (2017), All Shook Up (2018), Thirsty Curses (2019), and To the Ends of the Earth (2022). 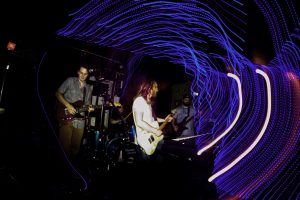 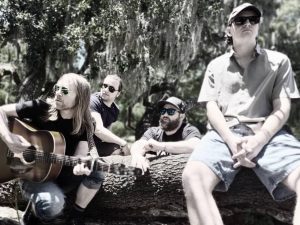 In early 2016, Wilson Getchell (formerly of Wall-Eyed and The Whiskey Decision) moved to Raleigh, NC, with an eye toward starting a band to flesh out, perform, and record his original material. By the end of 2016, the fledgling band had taken shape around Getchell and Otwell, along with Tradd Yancey (drums) and Keebler (bass) who rounded out the rhythm section. After several early name changes, the group adopted the moniker Thirsty Curses, and released its debut Holy Moly in February 2017, which featured the titled track single, as well as the single “Neon Sign”.

Following the release of Holy Moly, Thirsty Curses began performing locally and touring regionally, including stops in Charleston, SC, Richmond, VA, Charlotte, NC, Myrtle Beach, SC, Washington, DC, Philadelphia, PA, Virginia Beach, VA, Charlottesville, VA, and other cities in the region. ,Otwell left Thirsty Curses in August 2017 for what turned out to be a temporary hiatus and was replaced by Kevin See, who took over the lead guitar. In early 2018, Thirsty Curses returned to the studio to record All Shook Up. For the new album, Thirsty Curses enlisted the legendary Mitch Easter to engineer and produce the album at the Fidelitorium in Kernersville, NC. The album was recorded over four days in February 2018.  Although Otwell was not officially with the group during the recording of All Shook Up, his presence was still felt, as the album featured “Dimlit Cathedral”, a song co-authored by Getchell and Otwell. In addition, much of the lead guitar work on All Shook Up was either loosely modeled off of Otwell’s previous contributions or was directly lifted.

Following the recording of All Shook Up, Thirsty Curses hit the road again in March and April for a semi-national tour that saw them perform in Charlottesville, VA, Nashville, TN, Indianapolis, IN, Chicago, IL, among other cities.

The release of All Shook Up proved to be a boon for Thirsty Curses, as the band started to attract some regional and national attention. Alternative Addiction wrote “The band has an eclectic sound that touches on everything from punk rock to folk. They sound like a cross between the Avett Brothers and Rise Against.” In addition to “Dimlit Cathedral”, the album featured singles “Exile” and “I Can’t Keep Up”.

All Shook Up also got the attention of the label Spectra Music Group, which signed Thirsty Curses in May 2019.  Around the same time, Clayton Herring took over on bass guitar.  In June 2019, the band began recording Thirsty Curses at the band’s home studio in Raleigh, NC. The new album was released in November 2019 and featured singles “Bruises On Your Shoulders“, “Smash/Hit” and “Cold Black Ink”.  The album was similarly well received by press outlets. Beachcomber wrote “I’m a sucker for pop smarts, intelligent and witty lyrics, and a bang-up whistling tune. This record has all three.” WKNC radio blog wrote, “There is some phenomenal songwriting on this album. In every song, the lyrics flow and swing together extremely harmoniously, creating a sense of continuity and balance that lets you just sink deep into the music.” While All Ages Zine similarly praised the record, writing, “From the Refreshments tinged “Smash-Hit,” to the toe-tapping “You Don’t Have To Tell Me,” and the spastically haunting, jaunty melody of the piano laced “Cold Black Ink,” Thirsty Curses gives us slight touches of punk, folk, country, 90’s alternative, and even Americana with songs such as “Slice of Paradise” and “Red Marks,” but never truly dips more than a toe into the water of each sound. This album is all over the place stylistically, but that doesn’t mean that sitting in the middle of each song is what becomes their signature; top-notch songwriting!”

Following the release of its label debut, Thirsty Curses continued performing locally and regionally and working on new material. Like nearly every other band, Thirsty Curses was hard hit by COVID-19, which forced band to cancel its tour for 2020.  Over the course of the pandemic, Evan Miller took over on drums and Alexander Weir took over on lead guitar.  The band returned to performing live in 2021, albeit with a truncated schedule.  Over the course of 2021, the band also recorded its next album, To The Ends of The Earth, which released in March 2022.   Thirsty Curses has since returned to performing live and promoting its new album.